Introduced by the Barry Callebaut group after years of research, Ruby chocolate was officially unveiled in 2017. Discover a chocolate whose future already looks promising and radiant.

What is Ruby pink chocolate?

If you have never heard of pink chocolate, then you are about to discover a great revolution. Contrary to what you might think, pink chocolate has no added flavorings, colors or chemical ingredients...

In truth, pink chocolate is made from Ruby cocoa beans produced in Ivory Coast, Ecuador and Brazil. Ruby chocolate is produced through a process that combines several criteria: fermentation, temperature, conching time and acidity level. This type of treatment makes it possible to exploit and release the flavors and colors contained within the cocoa beans.

This variety of chocolate was introduced in 2017 by the Barry Callebaut Group, a Belgian-Swiss chocolate maker, after thirteen years of research to develop Ruby chocolate. Although the recipe and production method is a well-kept secret, Ruby chocolate is said to be made from unfermented and defatted beans. 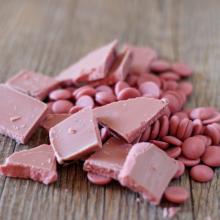 A new flavor in the age of time

The Callebaut Group's pinkish signature in the chocolate sphere is also anchored in an era where consumers are on the lookout for novelties.

Ruby chocolate offers an aesthetic beauty that consumers will be able to highlight on networks and other sharing channels. On the other hand, Ruby chocolate matches perfectly with many foods and beverages. For example, pink chocolate is compatible with champagne and Belgian beers such as Kriek, Rodenbach and Gueuze.

But that's not all, from a culinary point of view, Ruby chocolate has more than one trick up its sleeve. The combination of pink chocolate with caviar, Roquefort, Camembert and even wasabi, offers delicious and surprising aromas. The tangy and fruity flavor of Ruby chocolate offers perfect balance and harmony when coupled with more raw and intense aromas.

A burst of inspiration for chocolate makers

Belgian chocolatier Leonidas has revisited his famous Manon praline by swapping coffee cream for Ruby buttercream on a bed of delicious pralines. As for Nestlé, the brand proposed a bar made with Ruby chocolate, sheltering pieces of raspberry to enhance the natural acidic note of pink chocolate.

However, it should be noted that pink chocolate has already been presented to the Japanese public, and for the first time in the world. Kit Kat has launched its famous crispy puff pastry bars coated with pink chocolate. This novelty was an immediate success, giving rise to other equally unusual flavors.

A bright future for Ruby chocolate

The thirteen years of research by the Barry Callebaut group have resulted in a major discovery in the history of chocolate. The chocolate industry is one of the most powerful in the world, and pink chocolate is a great revolution!

In November 2019, the manufacturer Callebaut obtained temporary approval from the FDA (Food and Drug Administration) to market Ruby chocolate and operate it in the United States. In fact, North America was also hit by a wave of chocolate with an unexpected color ... 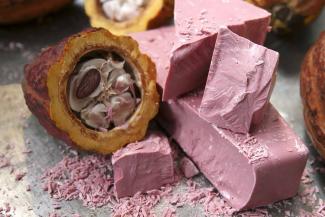