Driven by her passion for chocolate, Anne-Françoise Benoit managed to lead her family-owned chocolate business towards success and excellence.
When Mr and Mrs Benoit created their first chocolate and confectionery shop in Angers in 1975, no one could have imagined the success the company would be known for today. One of their daughters, Anne-Françoise Benoit, was the one who wanted to take over the shop in 1997 after her studies. This young and hard-working chocolate maker was quickly recognized for her qualities and efforts.
In 2003, she won the Young Talent Award at the Salon du Chocolat in Paris. After creating new chocolate-based products, Anne-Françoise Benoit decided to open a second store in 2004 to sell chocolate macaroons and candies. Three years later, this ambitious woman decided to open a laboratory in 2007 to develop her ever-increasing production.
In 2010, Anne-Françoise Benoit was ranked among the 12 best French chocolate makers by the famous Guide des Chocolats published by the Club des Croqueurs de Chocolat. 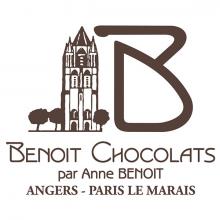